Developing… [Multiple updates below.] 3:27 p.m. EST: [CLICK HERE FOR LIVE VIDEO.] A helicopter has crashed into the East River in New York City, adjacent to the FDR drive, just north of 34th Street. WCBS 880 AM Radio in New York reports that at least two people have been extricated from the helicopter; two or three still remain trapped. The crash occurred at 3:22 p.m.

Update: 3:40 p.m.: The U.S. Coast Guard has joined agencies in rescuing the helicopter passengers. Two passengers were seen hanging on to wreckage in the water as rescuers attempted to save them. At least one person rescued was immediately given CPR by medical personnel. 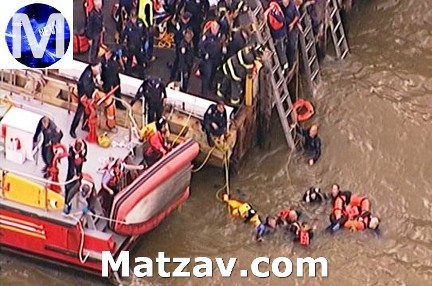 Update: 3:44 p.m.: We are now told that there were four people on board, and all four were rescued, though two of them remain in serious condition. Officials say that the passengers are fortunate that they weren’t killed on impact. The scene of the crash is a bevy of activity, with personnel from the New York City Police Department and the New York City Fire Department working in tandem with other officials to rescue and treat the helicopter passengers.

Update, 3:48 p.m.: The temperature of the water at the time of the crash was 67.8 degrees Fahrenheit. The climate was clear at the time of the crash, with very mild winds. The helicopter is no longer visible in the water. One report now claims that there might be others who were on board the aircraft who have not been accounted for. It is still unclear whether the chopper crashed during takeoff or landing.

Update, 3:51 p.m.: We are now told that there were five people on board, and the search is on for that fifth passenger.

Update, 3:56 p.m.: The NYPD has now confirmed that there were five people aboard. The pilot and three others were pulled from the water shortly after it went down. Authorities are still searching for one other person but the helicopter is fully submerged. The Bell 206 chopper missed its landing, coming up short, when it crashed. The helicopter apparently did not have flotation devices.

Update: 4:44 p.m.: Matzav.com has learned that the fifth passenger, a woman, has been found dead.