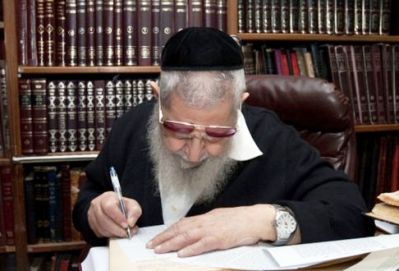 When speaking about the importance of hasmadah, diligence, Rav Yehuda Tzadka zt”l would often tell his talmidim the following story:

In the year תרצ”ו, Israeli authorities ruled that all residents of the Old City of Yerushalayim must turn out their lights after dark. The enemy was vicious, and the inhabitants of the Old City could not afford to take any chances. The once beautiful nightlife of the Jewish Quarter had become a distant memory.

As usual, the young Yehuda Tzadka was making his rounds throughout the yeshiva‘s dormitory, making sure all the room lights were out. Generally, Chacham Yehuda’s inspection was quick and simple. This night, however, was a bit different. As he neared the end of the hall, he noticed a small bright light, gleaming from one of the dorm rooms. Rav Yehuda approached, knocked lightly, and proceeded to slowly push open the squeaky wooden door. Chacham Yehuda was not surprised to find his dearest friend, Ovadia Yosef, leaned over heaps of scattered sefarim, surrounded by a few small candles to illuminate his precious books. He stood happily and watched as Ovadia would open one sefer, scan it, place it at his side, and repeat the process over and over again, while occasionally stopping to take notes.

Chacham Yehuda would conclude by saying, “I knew this boy was destined to be the gadol hador of the next generation. For that reason, I left him to study.”

Those who saw Chacham Ovadiah during his lifetime observed this unbelievable hasmadah. Even at a senior age and in frail condition, Chacham Ovadiah still focused on one thing: limud haTorah. He was always sitting and learning, day after day, year after year, decade after decade.

How fortunate we are to have had such an example of Torah greatness and diligence in our generation.