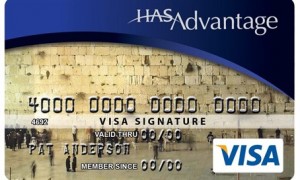 A major lawsuit has been filed against Israeli airline El Al for causing the collapse of HAS Advantage, a “support Israel” credit card with almost 30,000 members.

The suit alleges that, planning to start its own US credit card, the Fly Card, El Al acted to wipe out the local competition.

HAS Advantage founder Zev Dobuler says his company lost as much as $10 million, as well as a decade of his life’s work.

In April 2014, surprised HAS card members discovered that the points they were accumulating towards El Al flights were suddenly inapplicable.

According to Dobuler, El Al breached multiple agreements with HAS, causing it eventually to collapse. He claims the Israeli airline unlawfully profited from HAS and illegally used HAS ideas.

HAS Advantage – known as the first-ever credit card that enables users to simultaneously support Israel-related charities with their purchases – is suing El Al Israel Airlines for nearly $21 million.

The suit accuses El Al of a series of illegal activities, including breaching multiple agreements with HAS, thus causing it to collapse; unlawfully profiting from HAS; and illegally using HAS ideas and business models that were presented to them for the purposes of a joint venture – and which, the suit alleges, El Al then took for itself.

What makes this lawsuit particularly notable is that it is being backed and partially sponsored by the First Libra Fund, an Israeli organization that finances legal claims. HAS states that the investment committee of the Libra Fund – whose members include retired Israeli judges as well as experts in Israeli law and economics – examined the suit carefully and approved its funding.

On November 3, HAS submitted to the District Court in Lod, Israel, the massive lawsuit against EL AL. The lawsuit was submitted by the firms Altshuler-Welner and Nehushtan, Zafran, Scharf, Jaffe & Co.

The following is a statement from HAS Founder & CEO Zev Dobuler:

​Dear Former HAS Advantage Cardholders,
​
It’s been an honor serving as the Founder and CEO of this great company with great customers, customers who not only had Israel in their hearts, but in their pockets as well.

HAS has been my life’s work and I put every ounce of strength and effort into it since I thought of the concept in 2002 as a young 24 year old recently out of the IDF. As someone who made Aliyah from Far Rockaway NY in 1990, my dream was to create bridges between supporters of Israel around the globe and Israel, and HAS was the brainchild. HAS encompassed travel to Israel, support of Israel and promotion of blue and white products and to date we donated almost $1MM to charity and sent thousands of customers to Israel on bonus tickets.

When HAS unraveled last year, I didn’t release any statements about what happened because I was doing everything possible to try and settle the dispute with EL AL. Releasing the information would have only pushed a potential resolution further away. Ultimately, after many attempts in the last 18 months, including last month, EL AL declined to reach a resolution and therefore on November 3, HAS filed a $20.8MM lawsuit against it in Israel. So now the lawsuit has become public knowledge as well as the details.

In July 2012, EL AL approached HAS and requested to partner with it to issue a joint HAS EL AL credit card called the “EL AL Advantage” card. The joint credit card was a win-win for HAS, EL AL, cardholders and partner HAS charities. Unfortunately the joint credit card became the basis of a dispute between the sides which ended up causing HAS to collapse.

It’s a shame that the “EL AL Advantage” card never came to fruition and that EL AL wasn’t willing to settle the differences to jointly launch the card. Everything was done with the best intentions in mind for our cardholders and partners.

May cooler minds always prevail in all your dealings. I want to thank you for your membership and hope that one day we may work together again. Who knows…

With admiration and love of Israel,
HAS Founder & CEO, Zev Dobuler