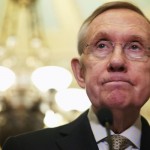 The 75-year-old Nevada Democrat suffered serious injuries to his face and eye during an exercise-related accident on New Year’s Day, but said his decision was not related to that incident.

“I want to be able to go out at the top of my game,” he aid. “I don’t want to be a 42-year-old trying to become a designated hitter.” Read more at The New York Times.