A harmless dummy hung in the spirit of Purim in Chicago somehow turned into a rescue effort yesterday after police and paramedics arrived at the scene thinking that a dummy was a real person.

Some bochurim at Telshe Yeshiva in Chicago, in honor of Chodesh Adar, created a Mishenichnas Adar sign and hung it on the front of their dormitory building. The bochurim, in their creativity, made it look like a person – a dummy – hanging up the sign had lost his balance and was hanging on for dear life on the high window sill while the fallen ladder sat below.

Police officers and paramedics were contacted by someone who was not aware that the “guy” was nothing more than a dummy. After arriving at the scene, police and paramedics cut the ropes holding up the “fellow” and finally reached him, only to discover 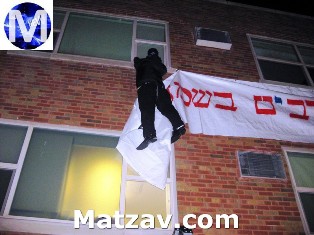 that he was nothing more than a dummy. The police and paramedics broke out in laughter, quickly figuring out that the sign and dummy were nothing more than a creative Purim endeavor by the boys. In fact, the paramedics, smiling from ear to ear, took the “person” on a stretcher and headed back to their station to show their “find” to their friends.

The bochurim later contacted them and asked if they could get their dummy back. (One of the bochurim needed to return the shaitel from the dummy’s head to his mother!)

Wishing everyone a joyful month of Adar.