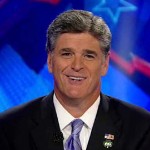 During his nationally syndicated radio show on Tuesday, host Sean Hannity argued that President Obama contradicted himself when he said that he did not have the authority to act unilaterally in granting amnesty to millions of illegal immigrants but did so anyway. This, to Hannity, was evidence that “the rule of law means nothing to [Obama].”

“The president himself thought he didn’t have the authority to do it, and he does it anyway,” Hannity said, referring to the president’s executive amnesty. “That is pretty pathetic. That just shows the rule of law means nothing to him.”

Below is a transcript of Hannity’s comments:

“We have a president that, nearly 25 times, said, ‘I don’t have the authority to just do this on my own,’ meaning illegal executive amnesty. And anyways, so, after the appeals court ruling comes in yesterday against his executive amnesty, another blow to him, Obama’s now counting on the Supreme Court to save him.

“And this is frustrating to me because the Republicans counted on the courts because they didn’t want to defund Obamacare, so they sent it off to the courts, and little did they expect John Roberts to side with the liberals on the Court.

“That’s not how they’re supposed to use enumerated powers given to them under the Constitution. They keep ceding power to the executive branch and to the judicial branch. So the administration announced today that they’re gonna file an appeal to the Supreme Court about this ruling that blocks the president’s executive actions on immigration.

“The first thing I would do if I went in to the Supreme Court to argue, if you’re allowed to do it, I would play Obama, repeatedly, saying himself, he does not have the authority to do it. I’m sure they can make it in arguments if not allowed to be played.

“Anyway, this comes less than a day after the Fifth Circuit decided to keep the injunction in place that has prevented the programs from ever taking effect, and the Department ‘disagrees with the Fifth Circuit’s adverse ruling, intends to seek further review from the Supreme Court of the United States,’ said the Department of Justice spokesman. The President himself thought he didn’t have the authority to do it and does it anyway. That is pretty pathetic. That just shows the rule of law means nothing to him.”