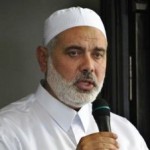 Hamas’s former prime minister, Ismail Haniyeh, declared this evening that, despite the elimination of several of its leaders, the terror group will remain strong, Arutz Sheva reported.

“We want to emphasize that despite the pain of their deaths, Hamas’s history has demonstrated more than once that it is stronger after each elimination of a senior member,” he said in a televised address from his hiding place, according to Channel 2 News.

“Once a senior member is killed, we continue on our way without hesitation,” said Haniyeh, who added that the battle between Hamas and “the Zionist enemy” is a difficult one. “(The enemy) has paid a high price extracted by the fighters of the Izz al-Din al-Qassam Brigades, both outside of Gaza and inside it,” he claimed. “Our brave people and our leaders are out to lift the siege on Gaza and liberate Jerusalem and Palestine from the neo-Nazi occupier that only destroys homes and kills women and children.”