A female zoo-keeper has died a “freak accident” after a tiger entered an enclosure at a wildlife park.

The attack happened at Hamerton Zoo Park, near Huntingdon, Cambridgeshire, at about 11:15 BST.

Cambridgeshire Police said: “A tiger had entered an enclosure with a keeper. Sadly the female zoo keeper died at the scene.”

Visitors were led away from the zoo. At no time did the animal escape from the enclosure, said police.

Officers investigating the death said it “is not believed to be suspicious”. Read more at 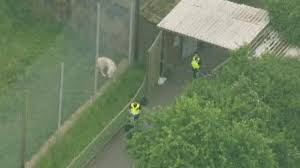