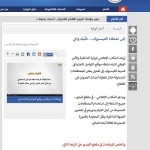 In light of the recent round of fighting in Gaza, the Hamas interior ministry has issued guidelines to Gaza Strip social media users for reporting events and discussing them with outsiders.

The ministry’s guidelines, which it is calling the “Be Aware – Social Media Activist Awareness Campaign,” were issued via an instructional video posted on its official website and via posters published on its Twitter and Facebook pages. Both the video and the posters were also posted on the ministry’s social media accounts and forums.

The guidelines are aimed at ensuring preservation of the line of Hamas and other Palestinian organizations; preventing the leaking of information that would be of military value to Israel; bolstering Hamas’s propaganda efforts outside the Gaza Strip, in both the Arab world and the West; and preventing damage to Hamas’s image. Hamas particularly seeks to cement the perceptions that its actions are a response to Israeli aggression and that all Gaza casualties are “innocent civilians,” and to ensure that there is no evidence of rockets being fired from Gaza population centers.

The Hamas interior ministry website included the following text along with its instructional video: “The Information Department of the Ministry of the Interior and National Security has instructed activists on social media websites, particularly Facebook, to correct some of the commonly used terms as they cover the aggression taking place in the Gaza Strip. The following Information Department video calls on all activists to use the proper terminology, in order to play their part in strengthening the home front and in properly conveying information worldwide.”

Following are excerpts from the guidelines:

“Anyone killed or martyred is to be called a civilian from Gaza or Palestine, before we talk about his status in jihad or his military rank. Don’t forget to always add ‘innocent civilian’ or ‘innocent citizen’ in your description of those killed in Israeli attacks on Gaza.

“Begin [your reports of] news of resistance actions with the phrase ‘In response to the cruel Israeli attack,’ and conclude with the phrase ‘This many people have been martyred since Israel launched its aggression against Gaza.’ Be sure to always perpetuate the principle of ‘the role of the occupation is attack, and we in Palestine are fulfilling [the role of] the reaction.’

“Beware of spreading rumors from Israeli spokesmen, particularly those that harm the home front. Be wary regarding accepting the occupation’s version [of events]. You must always cast doubts on this [version], disprove it, and treat it as false.

“Avoid publishing pictures of rockets fired into Israel from [Gaza] city centers. This [would] provide a pretext for attacking residential areas in the Gaza Strip. Do not publish or share photos or video clips showing rocket launching sites or the movement of resistance [forces] in Gaza.

“To the administrators of news pages on Facebook: Do not publish close-ups of masked men with heavy weapons, so that your page will not be shut down [by Facebook] on the claim that you are inciting violence. In your coverage, be sure that you say: ‘The locally manufactured shells fired by the resistance are a natural response to the Israeli occupation that deliberately fires rockets against civilians in the West Bank and Gaza’…”