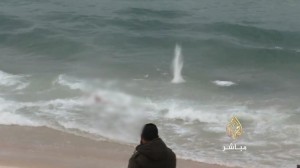 The Palestinian interior ministry in the Gaza strip has accused Egypt of shooting and killing a mentally ill Palestinian who had waded along the shoreline into Egyptian territory.

A video broadcast by the Arabic Al-Jazeera network and Gaza media outlets show the shooting which occurred on Friday. In the video, a young man who is naked, walks into the sea and crosses through a wire fence into Egyptian territory where Egyptian troops open fire on him from a watch tower.

As the man falls into the water, a second person on the beach attempts to signal towards the watchtower to stop shooting, but they continue to fire on the man.

“The shocking images aired by media outlets showing the death of the mentally disturbed young man by the Egyptian military mere meters from the border at Rafah testifies to the level of cruelty of those who carried it out and show that this was a cold-blooded execution,” the Hamas interior ministry in Gaza said in a statement.

“This is a reprehensible act that goes against all humanitarian laws and conventions,” said the ministry which continued to call on Egyptian authorities to open an investigation and prosecute military personnel in the tower.

The man who was killed was later identified as Ishak Khalil Hassan, 28, from the Gaza City neighborhood of Zeitoun. According to Palestinian reports, Hassan had a history of mental and emotional illness.

Relations between Hamas and Egypt have deteriorated since the military overthrew Islamist president Mohamed Morsi in 2013.

Morsi, a leader of the Muslim Brotherhood, had been sympathetic to Hamas, the Palestinian offshoot of his movement.