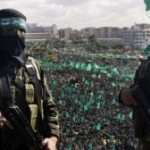 The Hamas terrorist government in the Gaza Strip has reportedly started allotting plots of land Israel withdrew from in 2005 to officials whose wages have been delayed.

According to Palestinian sources, Hamas Finance Minister Ziad al-Zaza announced Sunday that officials who served in the Gazan parliament before the formation of the 2014 Fatah-Hamas unity government who are still waiting for wages or severance pay will be given land as compensation.

All the land included in Hamas’s remuneration plan was once part of Gush Katif, the bloc of 21 Jewish communities in southern Gaza that was home to 8,600 Israelis before August 2005, when the communities were evacuated and the homes razed in Israel’s unilateral disengagement from Gaza.

Hamas’s decision to divvy up the land enraged Fatah officials in Ramallah, who said the move constitutes “unparalleled corruption,” and urged the Palestinian people “to come together and oppose the division of Gaza’s lands to [Hamas] cronies.”

Since the Fatah-Hamas unity government was formed in 2014, the Ramallah-based Fatah government has been paying Gaza-based Hamas officials’ wages, but Fatah has refused to dole out severance pay for some 40,000 Hamas government officials who were dismissed.