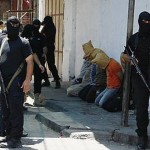 After Hamas’ string of public executions in the Gaza Strip garnered intense criticism, with Palestinian officials and human rights organizations calling them “provocative” and “grossly unfair”, senior Hamas leader Moussa Abu Marzouk has offered an unconventional perspective on the matter, saying that the actions were conducted in public in an attempt to satisfy the Palestinian people’s desires.

Abu Marzouk’s comments were made in an interview with al-Jazeera while he was in Qatar, where he met with Khaled Mashal to discuss the next steps after the collapse of ceasefire talks in Cairo.

During the interview, Abu Marzouk was asked whether “the information regarding the 18 informers (was) based on real time information, or did you already have the information at hand without conducting the execution, but the decision (to execute) was made today?”

The Hamas official’s answer was surprising: “No, basically there were already sentenced to death, but the execution was done collectively today (Friday).”

“It is possible that this step was taken to satisfy the public in this matter, without considering other legal measures that should have been taken,” Abu Marzouk added.

“I believe that the execution should have been conducted as it was done before, inside the prison yards and not in front of the public, as is usually the case in a court of law.” Read more at Ynet.