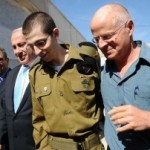 The Hamas liaison in Gaza for the cell that kidnapped and murdered three Israeli teens in the West Bank was Mahmoud Qawasmeh, exiled to the Strip after the 2011 prisoner exchange that freed captive soldier Gilad Shalit.

According to Israeli defense sources, Mahmoud Qawasmeh was responsible for transferring money from Gaza to the West Bank to fund the June 12 kidnapping of Gilad Shaer, Naftali Fraenkel and Eyal Yifrah.

Qawasmeh was serving a 20-year sentence when he was released in 2011. The leader of the cell was Mahmoud’s brother Hussam, who was arrested by Israeli counterterrorism police in July. The two Palestinians who murdered the three teens, Marwan Qawasmeh, a third brother, and Amer Abu Aisheh, are still at large.