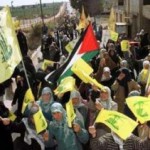 A Hamas leader is calling on the Lebanese terror Hezbollah to open up a second front against Israel in the north.

“We hope the Lebanese front will open and together we will fight against this formation [Israel],” Hamas deputy political chief Mousa Abu Marzouk told the Russian news agency RIA Novosti.

“There’s no arguing that Lebanese resistance could mean a lot,” Marzouk added.

The Lebanese border has been largely quiet since Israel and Hezbollah last fought in 2006. It is unclear if Hezbollah, which is allied closely with Iran and Syrian President Bashar al-Assad, would support Hamas, after Hamas broke with the Shi’a alliance in 2012.

At the same time, Hezbollah has been heavily engaged in Syrian civil war, where the Lebanese terror group has reportedly been stretched thin amid heavy fighting and high casualties.

Nevertheless, in a recent speech, Hezbollah leader Sayyed Hassan Nasrallah said he stands by the Palestinians in their fight.

“Hezbollah and the Lebanese resistance will stand by the Palestinian people’s uprising and resistance in our heart, willpower, hope, and destiny,” Nasrallah said.

“The IDF is doing a good job in the war in Gaza, and should know it must deal with the tunnels here in the north as well,” Mayor Nissim Malka told the Israeli radio station Kol Rega.