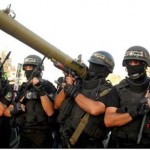 According to the report, the two went missing during Israel’s self-defense Operation Protective Edge in Gaza last summer.

After a thorough investigation, the brigades confirmed the death the two commanders, Bassil Abul Nagga and Ibrahim al-Ghamour, the source told the Turkish agency on condition of anonymity.

Arutz Sheva reported that the source said Hamas also learned that the Israeli army had kept the remains of the two commanders until the present time.

Gaza terrorists are still holding the bodies of two IDF soldiers, Second Lt. Hadar Goldin and First Sgt. Oron Shaul, who were killed in Operation Protective Edge. Hamas has linked the release of the bodies of the two soldiers with Israel releasing hundreds of jailed terrorists. In fact, a Hamas official claimed last week that such a swap was imminent.