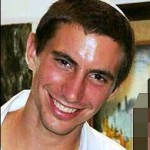 Hamas is now busy with psychological warfare that worked in the Gilad Shalit deal, in negotiations over the bodies of Israeli soldiers Staff Sergeant Oren Shaul and Lt. Hadar Goldin, who were killed in the Gaza war.

Hamas is readying to turn the talks over the body parts into a campaign aimed at achieving a wide-scale release of Palestinian prisoners, while humiliating Israel and glorifying its own achievements. Hamas is ignoring the fact that Israel has declared both soldiers killed in action.