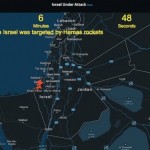 Israeli Ambassador to the UN Ron Prosor said Hamas has fired 2,500 rockets at Israel, and reiterated that if Israel were not facing rocket attacks, it would not need to carry out its own strikes.

“We did everything we could to avoid this conflict, but Hamas refused to stop the attacks. Israel agreed to five cease-fire proposals; Hamas rejected or broke all of them, even the ones that they requested themselves.”

U.S. Secretary of State John Kerry on Monday continued his push for a bilateral cease-fire, despite mounting Israeli media criticism of his efforts.