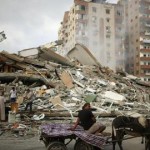 Hamas has dismissed as a sign of weakness warnings from Israeli Prime Minister Bibi Netanyahu for Gaza residents to leave any site where Palestinian fighters are operating, saying the locations could be attacked.

In a statement, Sami Abu Zuhri, a Hamas spokesman, said: “The [Israeli] occupation has failed in confronting the resistance in the field, and has resorted to threats of assassination and other threats designed to scare us.

“But the will of our people will not be broken.”

Speaking earlier, Netanyahu said: “I call on the inhabitants of Gaza to vacate immediately every site from which Hamas is carrying out terrorist activity. Every one of these places is a target for us.”

On Shabbos, the Israeli military warned residents of Al Zafer Tower, a 13-story building to leave, shortly before launching air strikes. The tower had housed a Hamas command center.

The Israeli prime minister said that his Gaza offensive would continue as long as necessary, a day after an Egyptian call for a ceasefire and new truce talks.

“Operation Protective Edge will continue until its aims are achieved… it may take time,” he said of the Gaza Strip operation launched on July 8, in remarks broadcast by public radio.

“There is not and will not be any immunity for anyone who fires at Israeli citizens, and that is true for every sector and every border,” he said.