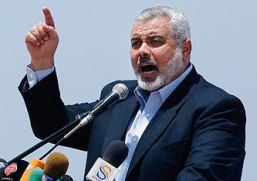 “We won,” said Hamas leader Ismail Haniyeh in his first statement since the ceasefire on Tuesday.  “The military victory by the resistance, and the legendary strength of our people will lead us to a lifting of the blockage on the Gaza Strip,” said the former prime minister of Hamas in the Strip in a formal statement released on the terror organization’s media outlets, according to Yediot Achronot.

The Hamas chief said that Palestinian unity helped reach the agreement in Egypt. “A unified people stood behind our delegation in Cairo. We complied with all the diplomatic procedures and contacted our brothers in Qatar and Turkey and, now, in Egypt in order to end the aggression.”

The leader of Hamas’ political bureau said: “I am confident that our Egyptian and Arab brothers all want to help lift the blockage permanently. We support the unified Palestinian delegation in order to produce the most appropriate diplomatic solution and to bring about a resolution that would reflect both the immeasurable sacrifices of our people and the work of the resistance. The delegation stuck to our demands.”

Yediot Achronot reported that he added that with the start of the ceasefire “the image of destruction seen by the world is the proof to the extent of the IDF’s defeat and its failure in fighting the brave resistance.”

The Hamas political leader said the organization “will be loyal to our people who were hurt by the brutal aggression. The blood spilled by the deceased and the injured is the leadership’s responsibility, we will not abandon them.”