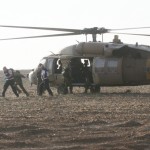 Israel’s Channel 10 reports that Hamas has offered to to make a trade to get their terrorists released from jail. Israel rejected the offer. According to the report, Hamas has offered to trade body parts they collected or captured from dead IDF soldiers in Gaza, in exchange for the release of the recaptured terrorists that had previously been released in the Gilat Shalit trade. Is there any limit at all to Hamas’s depravity?

Channel 10 also reports that Sayeret Matkal (Special Forces) had gone back, deep into the Rafah tunnel in which Lt. Hadar Goldin was kidnapped and killed.

The special forces unit brought back a critical (unnamed) object which proved beyond a doubt that Goldin was dead. It was based on that, that the IDF was able to reach a definite conclusion.

Goldin’s unit had been ambushed during a cease fire on Friday, August 1, 2014, by tunnel terrorists. Two additional soldiers were killed in that attack, and Goldin was taken.

The IDF reportedly prevented Hamas from successfully taking Goldin or his body hostage, by massively bombarding the area.