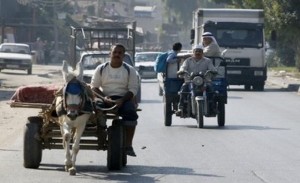 Sending an animal to its death to serve terrorist purposes may seem shocking, but this certainly wasn’t the first time Palestinian terrorists adopted this despicable tactic.

Up-to-date ISA intelligence alerted the IDF that terror organizations in the Gaza Strip intend to strap explosives to animals and send them in the direction of ground forces. On the night of July 18, there was at least one such attempt, in which a donkey suspiciously began to approach forces. The forces approached the donkey and it exploded at a safe distance, whereas no injuries were sustained by the IDF as a result.

This cruel incident is the most recent attempt by Gaza terror organizations to make such an abominable use of animals as explosives couriers. The IDF first encountered an animal-borne terrorist attack in June 1995, when a Palestinian terrorist rode an explosives-laden donkey cart toward an IDF position west of Khan Yunis and detonated the explosives. The terrorist and the donkey were killed, but the soldiers were left unscathed. Hamas claimed responsibility for the attack.

During the Second Intifada, Hamas and other terrorist organizations stepped up their exploitation of animals for the purposes of terror. In 2001, a terrorist rode a bomb-laden donkey cart toward an IDF position in the southern Gaza Strip and detonated the charge. In 2003, a Palestinian terrorist strapped a bomb to a donkey and then exploded it remotely on the road between Jerusalem and Gush Etzion. No humans were injured in the attack.

In June 2009, Palestinian terrorists approached the Karni crossing, located between Gaza and Israel, with several horses carrying mines and explosives. In May 2010, terrorists in Gaza detonated a donkey cart loaded with explosives near the border fence.

Most of these attacks involved donkeys and horses carrying carts loaded with explosives. However, IDF soldiers in the field reported multiple incidents where Hamas terrorists had strapped explosive belts to dogs.