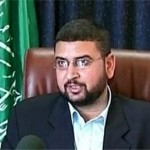 The spokesman for the Hamas terrorist organization, Sami Abu Zuhri, said on Tuesday, that arrests by Israel across the West Bank aimed at stopping the current intifada will not be effective.

“The Israeli arrest campaigns will not succeed to stop the intifada,” Abu Zuhri said. “It refutes Netanyahu’s alleged attempts to calm things down.”

Israeli forces carried out a campaign throughout the West Bank on Tuesday. Dozens were arrested, including Hassan Youssef.

Hossam Badran of Hamas said that Hassan Youssef’s arrest is “an Israeli failed attempt to break the Palestinian strong determination and steadfastness. Israeli arrests did not and will never scare our people,” he stressed.” These arrests will only add fuel to fire.”

Badran concluded by hailing the Palestinian youths’ “heroic steadfastness in the face of Israeli punitive and repressive measures.”