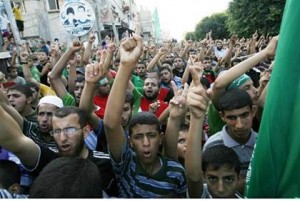 A Hamas spokesman openly welcomed news of a terror attack in Yerushalayim by one of its terrorists, which left nine people injured and killed a three month-old baby, Arutz Sheva reported.

“This is a natural response to the crimes of the occupation and invasion of our land by the Jews, particularly on the Al-Aqsa Mosque,” Hamas spokesman Hossam Badran stated on official Hamas television.

Hamas television has also confirmed the identity of the terrorist – who was shot and wounded by police, but is not dead, as initially reported in the press – as 21 year-old Abdur Rahman Slodi of Shiloach (Silwan). Slodi had previously served in Israeli prison for terrorist activities. Slodi rammed his car into the pedestrian crosswalk near the Ammunition Hill light rail stop, injuring nine people, including the baby.

Arutz Sheva reported the baby’s name as Chaya Ziso Hy”d, adding that the baby’s grandfather stated that her parents had been “waiting for years” to have children and had been returning from the Kosel when the terrorist attacked.