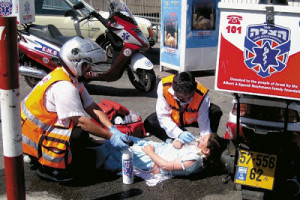 Every once in a while, the anti-Zionist media come out with a breathless article about how there are organizations helping Jews in Judea and Samaria, and are considered tax deductible in the US. (The first, I think, was The New York Times in 2010.)

Keep in mind that there are many categories of organizations that are tax exempt in the US (including charitable, religious, educational, scientific, literary, testing for public safety, fostering amateur sports competition, or preventing cruelty to children or animals), and that there is nothing in the IRS code that says that an organization that opposes current US foreign policy should lose funding. Such a law would be problematic, to say the least.

One of the organizations that offends Haaretz is Hatzalah Yehuda and Shomron, the first-responder ambulance services used by Jews in Judea and Samaria (the ambulance service also saves Arab lives.)

Haaretz looks at Hatzalah not as a lifesaving organization but as just another enabler of the most horrible crime that newspaper knows of: keeping certain Jews alive.

How much hate Haaretz has for its fellow Jews who want to live in their historic homeland!

As a friend mentioned to me, if Israel passed a law saying that organizations that are at odds with Israel’s foreign policy are ineligible for tax exempt status, Haaretz would be the first to call this a fascist law.

One other interesting fact: the self-righteous Haaretz accepted a grant from a tax-deductible organization to pay for the research to write this article.