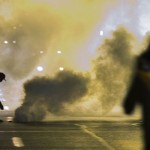 Missouri Gov. Jay Nixon’s curfew failed to bring calm to Ferguson. One man was shot as protests against the prohibition turned violent Sunday. Missouri State Highway Patrol Capt. Ron Johnson said in a press briefing just before 3 a.m. local time that a person had been shot near Red’s BBQ and critically injured. A police patrol car was also shot at, though no one was hurt.

According to Johnson, during the night a group of people were on the roof of Red’s BBQ, and man armed with a handgun brandished it in the middle of the street.

Police also said they used tear gas to cause a group of protestors on West Florrisant to leave when they wouldn’t follow officers’ request. In total, seven people were arrested.

There were concerns over clashes in the lead-up to the curfew. Patricia Bynes, a Democratic committeewoman for Ferguson Township, said “There are a lot of faces I’ve never seen before that are here just because of the curfew.” Members of the New Black Panthers have also appeared, with one telling reporters, “We’re not protecting the police, we’re protecting the people.” Read more at the St. Louis Post-Dispatch.