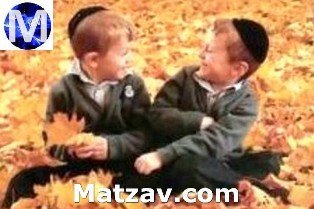 In what some have deemed a medical miracle, Yitzchok Gross, 7, and Michoel Gross, 5, were released today from Schneider Medical Center in Petach Tikvah about a month since they were accidentally exposed to a chemical agent, Phosphine, left behind by an exterminator.

R’ Shimon and Michal Gross of Yerushalayim were all smiles as they accompanied their two sons from the hospital.

The release was marked with some sadness, as the family is still mourning the tragic passing of Yitzchok’s and Michoel’s sisters, Yael, 2, and Avigayil, 4, in the aforementioned incident.

During a brief interview outside the hospital, R’ Shimon thanked Yidden all over the globe who davened continuously for Refoel Yitzchok Eizik ben Michal and Chaim Michoel Shlomo ben Michal. He stated that it is clearly thanks to Klal Yisroel‘s tefillos that they have merited a yeshuah and said that he feels honored to be “part of such a special nation.”

“We are returning to our home today with two healthy children, which is difficult to believe,” said R’ Shimon, “At the same time, we think of Avigayil and Yael….”

R’ Shimon specifically thanked family, friends and the devoted staff of Schneider hospital who gave their hearts and souls in treating the boys.

Boruch Hashem, the prognosis for the boys is good, as they have suffered no long-term neurological damage, according to physicians at the hospital.