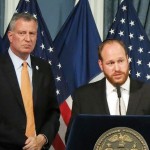 Now, Friedlander has admitted, after the fact, that he was paid to write the article.

The admission was made on the Zev Brenner radio program last night.

In his article, Friedlander calls Nadler’s statement on the deal “well-researched and thoughtful.”

Nadler has come under fire for his support of the deal.

But now, Jewish officials are focusing their ire on Friedlander.

Councilman David Greenfield, in a Tweet, wrote, “You readers should know that @EzraFriedlander is a lobbyist & paid political spokesperson. He is NOT a community leader.”