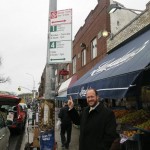 Currently, drivers must pay the meters along these avenues until 7 pm on Friday evenings. Keeping metered parking in effect so late creates an obstacle for observant Jews who cannot the feed the meter after sundown on Fridays which can be as earls as 4:30pm in the winter. Recently, DOT modified meters on 13th and 18th Avenue at Councilman Greenfield’s request to allow for prepayment of up to four hours. Greenfield, Felder, and Hikind now ask that the rules on Avenues J, M and P, Coney Island Avenue, Kings Highway, and New Utrecht Avenue match those on 13th and 18th avenue.

“My many thanks to New York City Department of Transportation Commissioner Polly Trottenberg and her team for implementing this innovative program on major streets in Boro Park. However, this program is a necessity throughout the rest of Boro Park and Midwood. I am pleased to be working with my colleagues in state government as we push for this project throughout the community,” said Councilman Greenfield.

“People have a hard enough time with traffic and finding parking. The least we can do is make it a little easier on Erev Shabbos (Friday afternoon),” said Senator Felder.

“I am delighted to work together with area elected officials and NYC Department of Transportation Commissioner Polly Trottenberg and her staff to expand this wonderful program to other parts of Brooklyn,” said Assembly Member Hikind.

Greenfield is one of the premier advocates for drivers in New York City. This past July, Greenfield’s historic muni-meter legislation went into effect citywide. Greenfield’s law has three parts: it allows drivers to pre-pay New York City’s muni-meters up to one hour before the meter regulations go into effect, it forces meters to shut off and not accept payment when the driver is not required to pay for parking like in the evening and it shuts down muni-meters when it runs out of paper receipts. Additionally, Greenfield passed the law that gives drivers a 5-minute grace period before being ticketed for Muni-Meter violations, and passed a law that ended the impossible-to-remove neon window stickers for alternate-side parking violations.

Finally, Greenfield is a long-time advocate for accommodating the needs of observant Jewish constituents. Greenfield and Community Board 12 have an agreement with the DOT to only do major road repairs in the summer to avoid traffic issues. Recently, Greenfield and the Community Board negotiated an end to 13th Avenue construction on Friday afternoons and most recently Greenfield secured funding in the budget to open four community libraries on Sunday to serve the needs of the community.