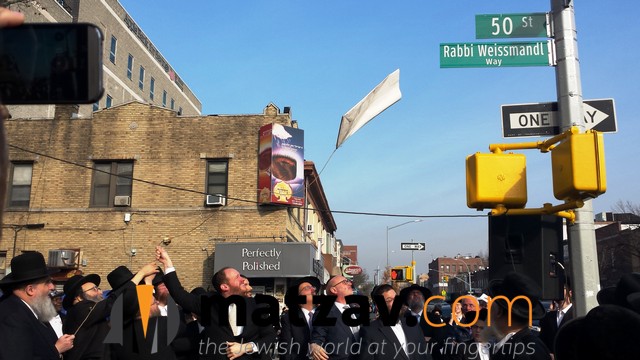 On Sunday, Councilman David G. Greenfield unveiled the street co-naming of 50th Street between 10th Avenue and 20th Avenue to Rabbi Weissmandl Way. The event was open to the public and was held at the southwest corner of 50th Street and 16th Avenue. Rabbi Weissmandl was a heroic resistance fighter whose efforts saved numerous Jews during World War II. Rabbi Weissmandl was one of the leaders of the underground Working Group who helped thousands of Polish refugees and Slovakian Jews. He dedicated himself to saving Jews and raising awareness of the mass extermination camps including Auschwitz.

“It’s not uncommon for people today to throw around the word hero. Today, anyone can be a hero. We throw around the term very loosely. We also throw around the word moser nefesh. Those aren’t the yardsticks we use when talking about holocaust heroes. R’ Michoel Ber Weissmandl was a hero. He was a Talmud Chacham. He was truly moser nefesh for yisorael. I am proud to rename a stretch of 50th Street between 10th and 20th Avenue, the location of the Nitra shuls, is the least we can do in tribute to this great Rabbi to ensure his legacy and heroism lives on in our community for generations to come,” said Councilman Greenfield.

“Thank you for this tremendous honor to be present here today and to participate in this street co-naming on 16th Avenue. Rabbi Weissmandl was one of the first to sound the alarm about what was happening in Europe and he was a hero of Hatzoloh. We thank David Greenfield for his passage of the New York City Council bill securing City funding to pay for City officers for yeshivas and bais yaakovs. He is a modern day Hatzoloh hero,” said Elly Kleinman, Founder and President of the Kleinman Holocaust Education Center.

“The time has come to recognize and remember Rabbi Weissmandl,zt”l, who was a real hero of our generation, whose only goal during the Holocaust was to save as many Jewish lives as possible,” said Ruth Lichtenstein, Publisher of Hamodia and Director of Project Witness.

The New York City Council has exclusive authority to rename street blocks in commemoration of New Yorkers who have made an enduring and lasting impact on large segments of the City’s population and whose importance to the City is a result of exemplary acts. “No person is more befitting of this honor than Rabbi Weissmandl,” concluded Councilman Greenfield. 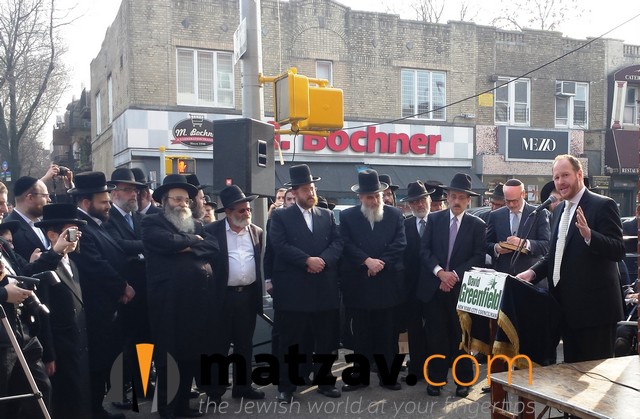