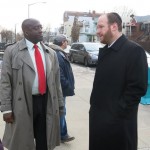 Brooklyn–Councilman David G. Greenfield is thrilled to announce that the Department of Transportation (DOT) has agreed to his long-standing request to allow Boro Parkers to pre-pay meters on 13th and 18th Avenues. This builds on Greenfield’s successful effort where he previously got the DOT to agree to pre-payment of meters on 16th Avenue. Drivers will be allowed to pay the meters up to four hours in advance at 3pm on Fridays for meters that are usually in effect until 7pm. This will go into effect on 13th and 18th Avenues by the end of next month and other areas in Boro Park and Midwood will be studied over the course of the next year. This is critical for many Shomer Shabbos drivers and their guests who cannot feed the meter once Shabbos begins on Friday. In the winter months, Shabbos begins as early as 4pm, preventing most residents from parking on the major avenues and exacerbating Boro Park’s parking crisis. This solution would add dozens of new parking spots on Friday in Boro Park.

“My many thanks to the Commissioner Polly Trottenberg, the Department of Transportation, and the De Blasio administration for taking into account the unique needs of Orthodox Jewish New Yorkers. Being able to pre-pay the meter is vital for those who observe Shabbos and will really help alleviate the pre-Shabbos parking crunch in Boro Park. I also appreciate the steadfast support of New York State Senator Simcha Felder and Assembly Member Dov Hikind. I look forward to working with them to expand this to other neighborhoods,” said Councilman Greenfield.

“This reasonable accommodation is long overdue, and is a win-win for everyone. People will be able to park and the City doesn’t have to worry about losing any revenue. I thank the de Blasio Administration and Councilman Greenfield for all their efforts to make this happen,” said Senator Simcha Felder.

Greenfield is one of the premier advocates for drivers in New York City. This past July, Greenfield’s historic muni-meter legislation went into effect citywide. Greenfield’s law has three parts: it allows drivers to pre-pay New York City’s muni-meters up to one hour before the meter regulations go into effect, it forces meters to shut off and not accept payment when the driver is not required to pay for parking like in the evening and it shuts down muni-meters when it runs out of paper receipts. Additionally, Greenfield passed the law that gives drivers a 5-minute grace period before being ticketed for Muni-Meter violations, and passed a law that ended the impossible-to-remove neon window stickers for alternate-side parking violations.

Finally, Greenfield is a long-time advocate for accommodating the needs of Orthodox Jewish constituents. Greenfield and Community Board 12 have an agreement with the DOT to only do major road repairs in the summer to avoid traffic issues. Recently, Greenfield and the Community Board negotiated an end to 13th Avenue construction on Fridays and most recently Greenfield secured funding in the budget to open four community libraries on Sunday to serve the needs of the community.