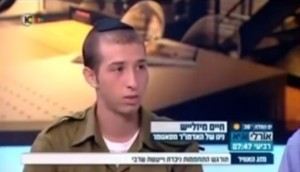 “…he would have been opposed, but times have changed,” Chaim told hosts on Israel’s Channel 10, who asked him what his venerated great-grandfather would have thought of his move. “I believe in our country, and I think I need to do army service,” he said in an interview.

His grandmother was a daughter of the Beirach Moshe.

Chaim, who arrived in Eretz Yisroel alone to volunteer for his IDF service, is among several hundred so-called lone soldiers, who are often children of Israelis living abroad, or idealistic youth seeking to help Israel. Many serve as part of their responsibility as olim (new immigrants) to Israel, and remain after their service, while some return to their countries of origin.

“It took me many years to get to the exact point, but when I was a little boy, I thought that ‘one day I will want to go to the army,” said Chaim, who studied for 18 years in a yeshiva. “It was a dream, and I didn’t think it would ever come true,” Chaim recalled.

Two such soldiers with dual U.S.-Israeli citizenship, Sean Carmeli of South Padre Island, Texas and Max Steinberg of Los Angeles, California, were killed in fighting during this summer’s Operation Protective Edge in Gaza. Another immigrant soldier, Jordan Bensemhoun, from France, was also killed in fighting in Gaza.

Chaim, who hopes to be accepted to the elite paratroopers’ unit, is due to next attend an army-mandated intensive Hebrew-language program which focus primarily on military, and not Biblical, terminology.

Watch a video of his interview HERE.

{Matzav.com Israel, with The Algemeiner Journal}