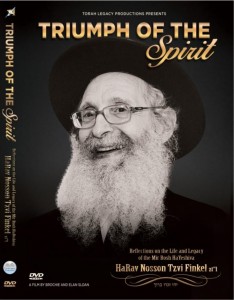 HaRav Nosson Tzvi Finkel zt”l dedicated his life to learning and spreading the light of Torah to all of Klal Yisroel. Loved by thousands of talmidim and balei batim alike, he overcame significant challenges and built the largest Yeshiva in modern times!

An inspiring new film has been released in his memory. Torah Legacy Productions presents: Triumph of the Spirit – Reflections on the Life and Legacy of the Mirrer Rosh HaYeshiva – Rav Nosson Tzvi Finkel zt”l.

Mrs. Brochie Sloan met briefly with the Rosh HaYeshiva zt”l during his visit to Baltimore in 2011 and was deeply inspired. After the Rosh HaYeshiva’s petira, Mrs. Sloan wrote the Artscroll youth biography: “The Story of Rav Nosson Tzvi” which was released in December 2014.

While writing the book, the author concurrently worked with Kol Rom Multimedia to blend priceless footage and pictures together with over 40 interviews. Some of the interviewees include Rav Aharon Feldman, Rav Matisyahu Salomon, Rabbi Berel Wein, Rabbi Paysach Krohn, and many others. 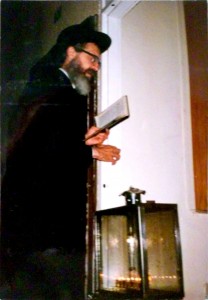 The film powerfully moves audiences and has already been shown in communities around the world as well as at the recent Agudah Convention.

The film portrays how Rav Nosson Tzvi zt”l would use every ounce of strength to overcome his nisyonos. For Chanukah, the Rosh HaYeshiva zt”l would wait until he had enough energy to light the menorah himself. If needed, he would even grab one hand with the other to guide it and overcome his physical limitations.

In addition to an incredible commitment to fulfilling mitzvos, the Rosh HaYeshiva would inspire his talmidim over Chanukah by speaking about Ameilus B’Torah, thinking about others, and the light of Torah. His tremendous love for the talmidim also shined at the Chanukah mesiba as he pushed himself to stand, clap, and sing with the bochrim.

In addition to the main film, the DVD comes with an additional two hours of Bonus features including post-film commentary by Rabbi Paysach Krohn, an extra hour of stories, HaRav Finkel zt”l speaking about the sweetness of Torah, videos of singing, dancing, and more!

The film is being distributed by Artscroll and is available at Artscroll.com, Amazon, and Judaica stores. To learn more or to schedule a public showing in your community, visit www.TorahLegacy.com. May this project be an aliyah for the Rosh HaYeshiva zt”l and an inspiration for us all.