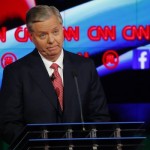 Earlier tonight, four Republicans who have the same chance of being elected president as anyone reading this — George Pataki, Rick Santorum, Lindsey Graham and Mike Huckabee — showed up for yet another GOP undercard debate.

Will Rahn reports for the Daily Beast:

Let’s first admit that it’s hard to get excited about these candidates’ rather narrow disagreements on policy, particularly when it comes to national security, which is the topic of both CNN-hosted debates tonight. They differ on this and that when it comes to civil liberties, how to prosecute the war against ISIS, and most notably on their views when it comes to Islam. But if there was a star tonight – not a winner, because there really wasn’t one, and really hasn’t been since Carly Fiorina in the first undercard debate – it was Graham.

How enervating would these kids’ table debates be if it weren’t for him? The chances of this or any other debate giving him a bounce in the polls are practically non-existent. But regardless of what you think of his uber-hawkish policy proposals, the South Carolina Senator’s humor, earnestness, and willingness to say things regardless of the political consequences deserves some measure of appreciation.

“I love George W. Bush!” he bellowed during a discussion of Middle East policy. That’s not something you’re going to hear much this cycle. And you’re very unlikely to hear such a full-throated defense of America’s Muslims from any other Republican this cycle. “You’re not the enemy,” he said at one point, addressing the thousands of Muslim soldiers serving in the American military. “Your religion is not the enemy.”

It makes sense in a way that Graham would do well in a national security debate. The diminutive former Airman has always concentrated defense and foreign policy. But his views on these issues are so out of touch with the Republican electorate at this point that it’s hard to see how he benefits, particularly when you combine that with his full-throated attacks on Donald Trump and Ted Cruz.

Sure, Graham said he’d support the Republican nominee, but “like Bob Dole, I may sleep late if it’s Trump.” He also repeatedly referred newly/minted Hawkeye State heartthrob Ted Cruz as an “isolationist,” a line of attack that we’ll see more of soon.

Other than that, and it was pretty much business as usual at the kiddie table. Pataki and Santorum sparred on minutiae, with the latter offering up a tepid defense of Trump’s comments on Muslims and knocking the “elements” of the GOP who he said weren’t interested in defeating ISIS. Huckabee, recently demoted from the main stage, did his typically solid-if-uninspiring job. But only Graham seemed interested in throwing Hail Mary’s, even if he doesn’t care that the GOP electorate is unlikely to ever appreciate them.

“If you want to kill terrorists, I’m your guy,” he said at one point. It was a blunt summation of his entire message so far, and it got some applause for audience, even if it’s the kind of sentiment that won’t get him a bounce anywhere else.