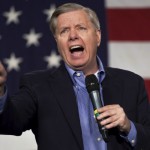 Now that GOP presidential candidate Donald Trump got to host Saturday Night Live, two of his rivals are demanding their equal time from NBC, as stipulated by the FCC’s equal time rules.

Lindsey Graham and John Kasich have filed requests for free time on NBC because, via his SNL gig, Trump got 12 minutes of free airtime.

NBC has yet to respond, but FCC officials expect the network to challenge the requests on the basis that neither candidate is a “legally qualified candidate,” via their lack of national presence compared to the party frontrunners. Read more at The Hollywood Reporter.