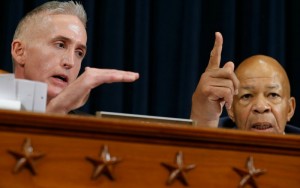 During the third hour of the Benghazi hearing today, the committee’s Republican Chairman Trey Gowdy and Democratic leader Rep. Elijah Cummings got into a heated exchange over the release of the entirety of former Clinton adviser Sidney Blumenthal’s emails and private testimony, reports the Daily Beast.

“Why is it you only want Blumenthal’s transcript released?” Gowdy yelled at Cummings.

“I’d like all of them released,” Cummings screamed back, continuing the Democrats’ criticism of selectivity on the part of the committee’s ranking GOP members.

Gowdy pushed back against the idea of releasing any transcripts from Blumenthal, saying the Clinton confidant knows nothing about Libya, therefore rendering his words irrelevant.

As the committee members argued with each other about process, Clinton sat rubbing her temples and waiting. “If you’re so interested in [Blumenthal] release the transcript,” another Democrat, Rep. Adam Schiff, said to Gowdy, who ultimately adjourned the first half of the hearing just as the argument came to a climax.