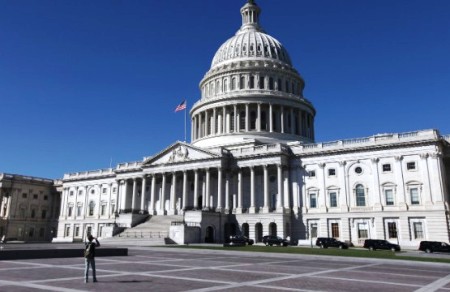 Let’s start with the obvious question: What happens now that a shutdown is in place?

Republicans and Democrats could not agree on a spending plan for the fiscal year beginning Tuesday as they wrangled over Obamacare, leaving federal coffers short.

Here’s a quick Q&A to get you caught up on what happened on Monday and what to expect going forward.

1. Why did the government shut down?

Congress has one key duty in the Constitution — pass spending bills that fund the government. If it doesn’t, most functions of government — from funding agencies to paying out small business loans and processing passport requests — grinds to a halt. Key services, like Social Security, air traffic control and military pay continue to be funded. Oh, Congress gets paid, too.

2. Why does it have to pass a spending bill in the middle of the year?

It may be the middle of the calendar year. But the government’s fiscal year runs from October 1 to September 30.

House Republicans insist any new spending include provisions to either defund, derail or otherwise chip away at Obamacare. Senate Democrats are just as insistent that it doesn’t.

4. How is Obamacare tied to funding the government?

The health care law isn’t directly tied to funding the government, but it’s being used as a bargaining chip. A group of Republicans, led by freshman Sen. Ted Cruz of Texas, believe the president’s signature domestic policy achievement is so bad for the country that it is worth disrupting government funding to undercut it.

5. What are some of the objections to Obamacare?

The Patient Protection and Affordable Care Act, the actual name of the law, requires all Americans to have health insurance. Opponents say it’ll hurt employers and amounts to overreach by the federal government. Some have also criticized the medical device tax that’s part of the law, saying that by imposing such a tax, it’s basically sending jobs overseas.

They say the law will expand access to health care and help rein in the rising costs of coverage. Obamacare prevents those with pre-existing medical conditions from being denied health insurance, and proponents say those who have health insurance will no longer have to indirectly pay for those who show up in emergency rooms uninsured.

7. What happened with the spending bill over the weekend?

The Republican-dominated House passed two spending bill amendments Sunday morning — one that would delay Obamacare for a year, and one that would repeal the Obamacare’s medical device tax. The bill now goes back to the Senate, where Democrats who control that chamber have consistently said any changes to Obamacare would be a deal-killer.

9. Has this happened before?

There won’t be a thunderclap or clang of bells. First order of business? Draw up a dividing line between workers deemed essential or non-essential. Those in the first category will carry on operations. The others will power down until Congress comes to its senses and funds the government.

So, for example, park rangers would start locking up national parks. And most furloughed federal workers are supposed to be out of their offices within four hours of the start of business Tuesday.

11. How many government workers could be furloughed?

12. What will this do to the economy?

Depends on how long it lasts. If it’s just a few days, the hit might not be severe. But three or four weeks? “(That) would do significant economic damage” — reducing GDP by 1.4 percentage points for the quarter, says Mark Zandi, chief economist and co-founder of Moody’s Analytics. The stock market didn’t like the idea of a shutdown on Monday. All three U.S. indexes recorded losses.

But if you need a federal loan to buy a house, you’ll have to wait. If you want a gun permit or a passport, that won’t happen anytime soon.

14. Will a shutdown kill Obamacare?

Probably not. Most of the money for Obamacare comes from new taxes and fees, as well as from cost cuts to other programs like Medicare and other types of funding that would continue even if the government shuts down.

15. Will the president get paid during a shutdown?

16. What about House and Senate members?

17. What does John Q. Public think of all this?

A CNN/ORC International poll that came out Monday found that 46% will blame congressional Republicans if the government closes its doors, with 36% saying the president would be more responsible and 13% pointing fingers at both.

18. Is there any hope if a deal isn’t struck by midnight?

If lawmakers reach an agreement by late Monday night, but the funding bill hasn’t made it to the president’s desk, the government can ignore a short lapse in funding and carry on in good faith knowing that it will. The last time that happened was in April 2011.

19. Isn’t there another matter — the debt ceiling?

Ah yes, that’s the next battle brewing. Remember that time when you maxed out your credit card? That’s what the debt limit is all about. The U.S. is on the verge of maxing out its $16.699 trillion credit card. And the president must ask Congress to raise the country’s credit limit.

Like the potential shutdown, this is also a Washington-manufactured crisis. And it too is being used for leverage to undermine Obamacare.

But the debt ceiling debacle won’t come to a head until October 17. Perhaps it’s best to deal with one showdown at a time.

20. Can they agree on anything?

Through all the partisan wrangling, the House and Senate did agree on one thing. They finalized legislation on Monday to pay U.S. troops absent a spending agreement.