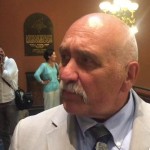 A Republican lawmaker from South Carolina wants to require registration for professional journalists in his state.

According to the Post and Courier, “the bill would create requirements for people wanting to work as a journalist for a media outlet, and also before that outlet could hire anyone for a reporting position.”

Pitts’ law would give the South Carolina secretary of state authority over a “responsible journalism registry” that would also establish the proper qualifications of a journalist, much like how lawyers and doctors are overseen by a board. The proposed law comes as Pitts’ response to what he feels is unfair media coverage of gun owners. Read more at Post and Courier.