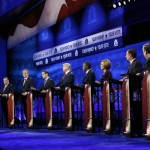 Several Republican presidential candidates met privately on Sunday to begin drafting a list of demands to negotiate with broadcasters looking to sponsor primary debates, pushing aside the Republican National Committee and aiming for greater control.

GOP lawyer and dealmaker Ben Ginsberg reportedly distributed a draft of the list, which included demands on debate format, moderators and questions.

Instead of allowing the RNC to negotiate with media directly, campaigns for 12 of the 14 leading GOP candidates plan to hold a group conference call with the broadcast sponsor before each debate, according to Barry Bennett, campaign manager for retired neurosurgeon Ben Carson. Read more at the Washington Post.