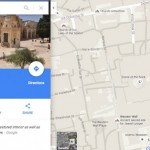 Social media users were aghast Motzoei Shabbos after it was discovered that searching the term “death to the Jews” on Google maps directs you to the holiest site in Judaism, the Har Habayis.

As of early Sunday morning, the genocidal slogan both in English and Hebrew landed map searchers at the same site.

A search in Arabic found no results on the map search engine.

The Jerusalem Post observed that the results appeared to be driven by the word “Jews” in the slogan, rather than the first more offensive part.

Indeed, a search using the word “Jews” only resulted in highlights for the locations of the Har Habayis and the Kosel.

The Palestinian Authority regularly negates any Jewish connection to the Har Habayis.

A wave of violent attacks  on Israelis which began last month has been driven by erroneous claims by the Palestinian leadership that Israel intends to change prayer arrangements on the Har Habayis.