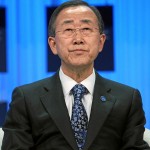 In a visit to southern Israel on Tuesday, U.N. Secretary-General Ban Ki-moon got a taste of Hamas’s network of terror tunnels running under the Israel-Gaza border. Israeli officials showed Ban the opening of a tunnel near Kibbutz Ein Hashlosha.

Ban told southern Israel residents that the $5.4 billion dollars pledged to Gaza reconstruction at an international donors conference in Cairo on Sunday would not be used by Hamas to fund terrorism. Additionally, he met with the family of Daniel Tragerman, the 4-year-old boy killed in Nahal Oz by a mortal shell during the Israel-Hamas war.

“[Daniel died] even without knowing anything, even without being able to grow up. This is very sad,” Ban said.

“I am here with a very heavy heart,” Ban said. “The destruction which I have seen coming here is beyond description. This is much more serious destruction than what I saw in 2009 immediately after the violence at that time.”