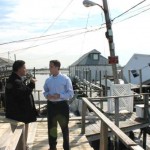 Far Rockaway, Queens – In a major victory for families in Far Rockaway, Assemblyman Phil Goldfeder announced a decision by the NYC Department of Transportation (DOT) to install a new traffic signal on Seagirt Boulevard at Beach 13th Street. This comes after Goldfeder wrote to the agency to request improved beach access for families living along the dangerous, heavily-trafficked arterial roadway.

“The boardwalk and newly renovated park are an extension of our homes and community and the installation of a traffic light at Beach 13th Street will improve access to the area and increase pedestrian safety along this busy stretch of Seagirt Boulevard,” said Assemblyman Phil Goldfeder. “Commissioner Garcia and the Department of Transportation have shown considerable leadership in their proactive approach to keeping our families safe and I commend them for listening to our concerns.”

In an October 20th letter to Assemblyman Goldfeder, DOT Queens Commissioner Nicole Garcia announced the agency’s decision to approve a traffic light at the intersection of Seagirt Boulevard and Beach 13th Street. According to the letter, installation will be performed by contract and is tentatively scheduled to be completed by February.

The decision follows a February 2015 inquiry by Goldfeder into the lack of crosswalks along Seagirt Boulevard. As Goldfeder noted at the time, residents in the area have no safe way to cross the busy boulevard between Beach 9th and Beach 17th Streets. This lack of access encourages pedestrians to cut across the busy road rather than walk the extra blocks to reach a crosswalk, Goldfeder argued.

Seagirt Boulevard, which runs east-west in Far Rockaway, is a heavily-trafficked six-lane arterial roadway with grass medians that links the Rockaway Peninsula to nearby Nassau Expressway. The new traffic signal will be directly adjacent to the popular boardwalk and park on the southern side of the boulevard.

In a 2014 study of the Far Rockaway Central Business District, the DOT determined that the nearby intersection of Beach 20th Street and Seagirt Boulevard was among the most dangerous in the community, with 33 traffic accidents occurring between 2007 and 2011. The area was also the subject of a walkthrough organized by Goldfeder with DOT’s Queens Office and attended by Commissioner Garcia.

“Our families and children deserve access to local parks without the fear of crossing dangerous streets and this new traffic signal will ensure everyone can utilize everything our community has to offer,” concluded Goldfeder.