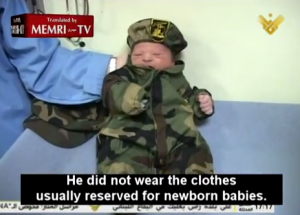 A newborn baby in Lebanon was dressed in Hezbollah military fatigues as his first outfit, according to a Hezbollah news report.

In a report that recently aired on the Hezbollah satellite TV channel Al-Manar and was translated by the Middle East Media Research Institute (MEMRI), a correspondent said that the military fatigues “were the first garment to touch [the boy’s] tender body.”

Terrorist organizations such as Hezbollah and Hamas have long been known to indoctrinate children in violence and hate.

“Nothing could be better than him becoming a soldier of Imam Mahdi,” said the Lebanese mother of the boy, referring to a prophet of Shi’a Islam who is believed to return on Judgment Day. “This reflects the continuation of the path of the Islamic resistance, one generation after another.”