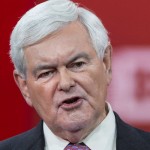 The United states is “in a war with international efforts to create Islamic supremacism,” former House Speaker Newt Gingrich said Friday, pointing out that the battles are world wide and Congress needs to make an authorization for a global fight.

“ISIS itself is a term that has very limited meaning,” Gingrich told Fox News’ “America’s Newsroom” host Martha MacCallum, pointing out that there are extremists in the United States as well as overseas.

“One of the people, of the two killers in California, one was born in Indiana,” said Gingrich. “The husband was not an immigrant; he was from Indiana. We have, I think, 20 cases now in Minnesota of various Somali-Americans who have been involved with terrorism.”

FBI Director James Comey has also said there are about “1,000 people in the U.S. under surveillance right now for involvement with Islamic supremacism,” said Gingrich, “So I think, that this is a much more complicated story.”

Gingrich said back in 2001, he was at the CIA counterterrorism center where he was being briefed, and at that time, the potential recruiting base was about 3-5 percent of Islam, or about 39-65 million people.

Extremism, he continued, is “a virus. This is much more like Ebola. You have to think of it as an epidemiology problem, and you have to say to yourself , ‘how am I going to track down and defeat this ideology everywhere that it appears?'”

Meanwhile, there is no unified strategy, said Gingrich, “and that’s why we need a series of hearings that begin to lay out the fact. I did a speech two weeks ago, and I outlined the strategic planning problem that we’re faced with.”

But there are “many complexities,” but it was “King Abullah of Jordan who said back in the spring we are [in] World War III, and it’s between civilization and barbarism.”

Abdullah made his comments after one of his pilots was burned to death by ISIS, said Gingrich, “and I think he has it exactly right. You had the same thing happen with President [Hosni] al-Sisi of Egypt, who went and lectured the professors at Cairo University and said, ‘look, we have got to stomp out this kind of radicalism, or we’re going to isolate the Arab world from the rest of civilization.'”

Actually, the situation started 36 years ago, with the Iranian hostage crisis of 1979, after which then-President Jimmy Carter suspended all visas for people coming in from Iran, said Gingrich.

“This administration should be massively helping Jordan which is our most stable ally in the region,” said Gingrich. “There is no possibility that this president has a clue about the real world.”