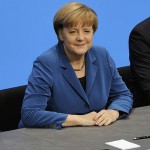 A 14-year-old Palestinian refugee who cried after German Chancellor Angela Merkel told her the country couldn’t accommodate everyone has been granted a longer stay, The New York Times reports.

Reem Sahwil met Merkel at a town hall-style meeting in July and told the German leader that her family had been waiting for four years to be granted permanent residence status in the country.

Sahwil will now be able to stay in Germany for another year, according to Bild. Her family received the extension through March 2017 “due to good integration into society.”

Sahwil had said she appreciated Merkel’s honesty, but the chancellor’s awkward attempt at comforting the teen was criticized by other politicians. Read more at The New York Times.