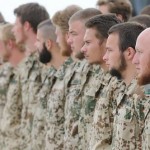 Germany and Israel have conducted several joint exercises in urban warfare as part of the largest-ever collaborative training held between the two nations.

More than 100 German soldiers came to Israel to train at the Tze’elim army base in the south of the country, bringing with them five heavy military vehicles. The soldiers arrived several weeks ago and will stay in Israel until Friday.

“We’ve had experience in that over the past 10 years—in Afghanistan and Kosovo. The Israeli army also has experience,” said German Brig. Gen. Ernst-Peter Horn., who came with the soldiers to Israel, according to Haaretz.

The exercises are being held despite the ongoing violence in Israel. The German soldiers were also invited to Friday night Shabbat dinners with Israeli families. “I didn’t know what to expect, but it wasn’t different from my family back home,” one soldier said.