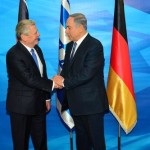 During the meeting, Netanyahu emphasized “the uniqueness of the [Israel-Germany] bilateral relationship, which is characterized by a tragic [Holocaust] past alongside a constant view toward the future and the continued deepening of cooperation based on the two countries’ shared values,” Netanyahu’s office said in a statement.

“The German government will time and again state that it is important that the relationship between us will go on and that no one, neither today nor in the future, could negate Israel’s right to defend itself and its very existence,” Gauck said at a press conference.

“We are aware that what we have achieved is based on values, and that peace cannot be taken for granted, and that is why it is so important that Israelis and Germans will work together at all levels, not only at the political level, but through culture, civic commitment, and science,” he added. “We must continue to strengthen the relationship.”