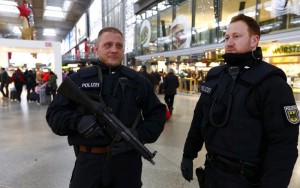 Police in Munich, Germany are still on high alert days after warnings of a planned attack on New Year’s Eve, which prompted the closing of two train stations.

Authorities received information indicating that five to seven ISIS militants were planning attacks throughout the city that night.

Up to 200 officers were patrolling streets in the city today to be on the lookout for any suspicious activity. Read more.