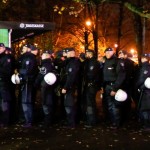 Police have suspended a soccer match Tuesday in Hannover, Germany, between the German and Dutch national teams, citing indications that there was explosive material in the stadium.

Everyone from the stadium was reportedly evacuated after a suspicious package was discovered.

Police are also reportedly holding a man at gunpoint one kilometer from the stadium at this time.

Earlier today, Belgian authorities canceled a match between Belgium and Spain in Brussels. Read more at The New York Times.