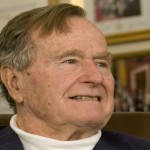 Former President George H.W. Bush made some surprising comments about Dick Cheney and Donald Rumsfeld regarding their reaction to the Sept. 11 attacks in a new biography, Fox News reported.

The 41st president is quoted in Destiny and Power: The American Odyssey Of George Herbert Walker Bush as saying Cheney and Rumsfeld, both top officials in George W. Bush’s administration, were too hawkish in their response, which ultimately damaged America’s reputation.

Bush Sr. said Dick Cheney, who served as his son’s vice president, “became very hardline and very different from the Dick Cheney I knew and worked with,” according to Fox New’s report. Cheney also served as defense secretary in Bush Sr.’s 1989-1993 administration.

H.W. was more critical of Rumsfeld, who he called “an arrogant fellow” who “hurt the president,” referring to his son. The book, by Jon Meacham, will be published next Tuesday. Read more at Fox News.