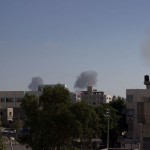 As long term ceasefire negotiations continue between Israel and Hamas in Cairo, Egypt, residents of Gaza are beginning to criticize the decisions of Hamas in the conflict.

Hamas has “committed many mistakes,” said Ziad Abu Halool, who works for the Gazan government, reported the Washington Post. “All the Palestinian factions should stop firing rockets. It’s enough. We’ve been suffering.”

“When they fire from here, Israel repays us with an F-16 airstrike,” said Rafaat Shamiya, another resident. “All the people are whispering, ‘Why didn’t Hamas accept the Egyptian initiative in the beginning of the war when the casualties were still low?’ ” added Palestinian journalist and political analyst Hani Habib.

“They just fight Israel, and then they leave everything,” said Mahmoud, 20, who identified only by his first name. “The people will pay the price.”

Meanwhile, a video journalist for the Associated Press, Simone Camilli, was among 5 people killed Wednesday in Gaza in an accidental explosion of an ordnance left over from the fighting. Camilli, 35, is the first foreign journalist killed in the Gaza conflict, reported Yediot Achronot.